This book gives an excellent overview of Flemish art from the Hermitage in St Petersburg: 75 paintings and 40 drawings, including numerous masterpieces of the Antwerp School.

You buy from our partner Hermitage Amsterdam. The seller is the first contact person for questions and return conditions after purchase. You can order and pay via dutchmuseumgiftshop.nl.

A large proportion of the paintings featured in this book were collected in the eighteenth century by Catherine the Great. Featuerd are superb collections such as those of Crozat and Brühl, which Catherine bought up in their entirety. Many of these paintings were originally displayed in churches and monasteries in Antwerp and other European cities. Most attention in the book focuses on the ‘big three’ of the Flemish Masters: Peter Paul Rubens, Anthony van Dyck and Jacob Jordaens. Rubens is considered the most important, the most talented, and the most influential seventeenth-century Flemish painter. He was considered a phenomenon in his day too; a true homo universalis.

Besides the work of Rubens, the portraits produced by Van Dyck for the court of King Charles I of England also share the limelight; along with impressive history paintings by Jordaens, exuding the vibrant atmosphere in which he excelled.

Other masters in Rubens, Van Dyck & Jordaens include Frans Snijders, with a number of surprisingly dynamic still lifes, and David Teniers the Younger, with numerous delicately-painted genre pieces. The book also discusses Antwerp as a city of art and the history of the Flemish art collection in the Hermitage.

The Hermitage Amsterdam takes it as their mission to draw upon art and history to inspire, enrich, and offer the opportunity for reflection. By way of their exhibitions and activities, the museum presents world heritage from the collections of various museums in innovative ways. The museum also houses collections from other museums, including the Amsterdam Museum, the Rijksmuseum (the exhibition Portrait Gallery of the 17th Century), and Museum van de Geest | Dolhuys (Museum of the Mind | Outsider Art).

The museum is housed in the Amstelhof, a historical building that used to be a home for the elderly from the late 15th all the way to the early 21th century. Only in 2007, the last residents were moved out of the building, which was in dire need of renovation. Two years later, on 20 June 2009 the Hermitage Amsterdam was opened to the public with the launch of the exhibition At the Russian court.

Be the first to review “Rubens, Van Dyck & Jordaens
Flemish Painters from the Hermitage” Cancel reply 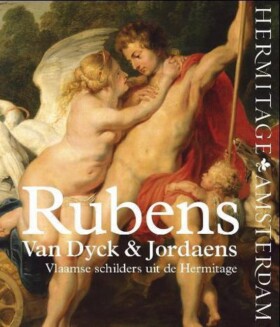