This poster features the work Groucho Marx, A night at the opera by Joost Swarte. This famous artist, designer and illustrator was exhibited at the Kunsthal in 2019.

Availability: Only 1 left in stock (can be backordered)

You buy from our partner Kunsthal. The seller is the first contact person for questions and return conditions after purchase. You can order and pay via dutchmuseumgiftshop.nl.

The poster comes shipped in a tube.

In 2019 Joost Swarte celebrated his fiftieth anniversary as an illustrator, designer and architect with an exhibition at the Kunsthal Rotterdam. The exhibition ‘Joost Swarte everywhere’ paid homage to fifty years of drawing by presenting a cross section of Swarte’s body of work. From his first cartoons, original drawings, sketches, designs and objects to his most recent work. The exhibition also included showcased sketches that have never been exhibited before.
Joost Swarte (1947, Heemstede) studied Industrial Design in Eindhoven in the late 1960s, and produced illustrations for local Eindhoven publications during that time. He first appeared in the spotlights as part of the alternative cartoon movement of the 1970s. Halfway through the 1980s, Swarte’s field of activity moved from cartoon drawing to making illustrations for magazines such as Humo, Vrij Nederland and The New Yorker. He also designs posters, logos, stamps, furniture and buildings (Toneelschuur, Haarlem, 2003). Furthermore, Swarte is co-initiator of magazines such as Modern Papier and Scratches, of the ‘Stripdagen Haarlem’, the largest biennial cartoon festival in Europe, and of the Hergé Museum in the Belgian city of Louvain-la-Neuve.
Learn more about Joost Swarte and the exhibition here.

Be the first to review “Poster Groucho Marx, by Joost Swarte” Cancel reply 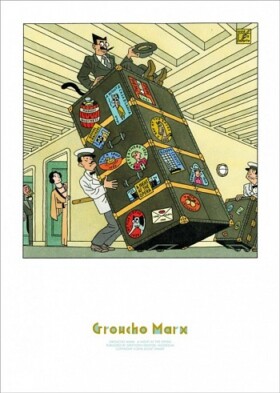 Availability: Only 1 left in stock (can be backordered)