This pillow case features Picasso’s work Le Chapeau de Paille. It was created by Jules Panzu for the museu shop collection of the exhibition “Extra Large” at Kunsthal Rotterdam.

You buy from our partner Kunsthal. The seller is the first contact person for questions and return conditions after purchase. You can order and pay via dutchmuseumgiftshop.nl.

From 28 March 2020 to 3 January 2021, Kunsthal Rotterdam presented a large-scale retrospective of imposing tapestries based on designs by renowned artists like Pablo Picasso, Le Corbusier, Miró, Vasarely and Louise Bourgeois. The exhibition ‘Extra Large’ focused on a period of a hundred years, with tapestries made directly after the First World War up until now, and revealed a virtually unknown aspect in the bodies of work of many modern and contemporary artists. They have been using the age-old weaving technique as the point of departure for their textile art while constantly reinterpreting it. Most of the sixty works were produced at the historical institute ‘Manufacture des Gobelins’ in Paris. With their combination of artistic finesse and extraordinary craftsmanship, these metres-high, handwoven tapestries are of an unrivalled quality and a joy to behold. They show how surprisingly modern the traditional craft of weaving still is.

Learn more about the exhibition. 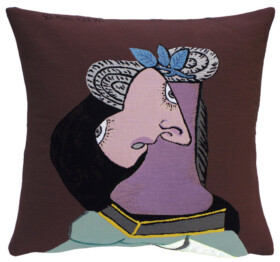