A tribute to a leading fashion pioneer. With the murder of Gianni Versace, the fashion world lost one of the most important designers of the 20th century.

The book accompanying the must see exhibition in the Groninger Museum.

You buy from our partner Groninger Museum. The seller is the first contact person for questions and return conditions after purchase. You can order and pay via dutchmuseumgiftshop.nl.

Gianni Versace was assassinated in 1997, but his progressive philosophy is still recognisable in fashion today. Versace broke with traditional male-female clichés by designing clothes for both sexes and incorporating symbols of sexuality and power into his creations. His open homosexuality made him an important figure in the LGBTQ movement. Moreover, he played a major role in encouraging women’s self-awareness by not concealing their bodies. At the same time, as a clever marketer, he attracted celebrities to promote his brand and turned unknown models into true superstars.

In Gianni Versace Retrospective, the work of one of the most influential couturiers of all time comes to life. Men and women’s outfits, accessories, fabrics, interior designs, and memories from the shows of his heyday between 1989 and 1997 showcase Versace’s extraordinary creativity. In addition to being a retrospective, this book is also a tribute to the exuberant world of the Italian fashion designer, full of extravagant clothing and lavish catwalk shows in which fashion, pop, and design came together in a spectacular way.

Be the first to review “Gianni Versace | Retrospective” Cancel reply 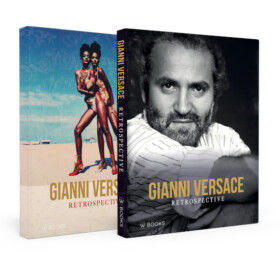