“I could gaze at the images in this book for hours. They are as fascinating as illuminated manuscripts or magic lantern slides.” – Martin Scorsese

Eye Filmmuseum presents a selection of 50 color illustrated postcards from the visually stunning book Fantasia of Color in Early Cinema, a treasure trove of early color film images from the Eye collection.

We normally think of early film as being black and white, but the first color cinematography appeared as early as the first decade of the twentieth century.

This elegant postcard box features illustrations on the outside as well as on the inside, can be closed with an elastic band, and contains 50 illustrated postcards printed on heavy weight, matte paper. Noted on the back of each individual postcard is the film from which the still is originated. 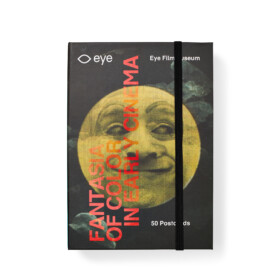