For the 10th anniversary of David Lynch’s reflection on meditation and creativity, this new edition features interviews with Paul McCartney and Ringo Starr.

When it first appeared in 2006, David Lynch’s Catching the Big Fish was celebrated for being “as close as Lynch will ever come to an interior shot of his famously weird mind” (Rocky Mountain News) Now for the bestseller’s 10th anniversary, Lynch dives deeper into the creative process and the benefits of Transcendental Meditation with the addition of his exclusive q-and-a interviews with Paul McCartney and Ringo Starr.

The musicians open up to Lynch about their artistry, history, and the benefits they have experienced, artistically and personally, from their decades-long practice of Transcendental Meditation — a technique that they and their fellow Beatles helped popularize in the 1960s.

Catching the Big Fish is a revelation for all want to understand Lynch’s personal vision. And it is equally compelling for any who wonder how they can nurture their own creativity.

Be the first to review “Catching the big fish” Cancel reply 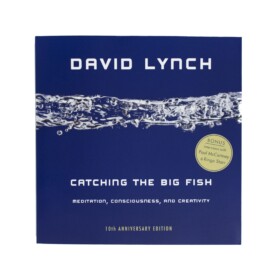