This sturdy, 19th century bronze pocket sextant is placed on an elegant, beautifully crafted mini-tripod. These classic campaign glasses were used by Victorian gentry and Army & Navy to observe while able to take notes and sketch.

You buy from our partner Het Scheepvaartmuseum. The seller is the first contact person for questions and return conditions after purchase. You can order and pay via dutchmuseumgiftshop.nl.

This bronze pocket sextant is a replica of an original, 19th century compass at the National Maritime Museum. The museum has a stunning collection of navigational instruments, including depth gauges, speed indicators and of course compasses. They are objects of beauty that fire the imagination.

Finding your way is easy these days, thanks to satellite navigation. In the old days, navigation was much more difficult – especially at sea. Old navigational instruments, such as this bronze pocket sextant, will give you an idea of how inventive the sailors of the past were.

Right up until the 20th century, ships still depended on the sun, moon and stars to navigate the seas. Sailors used the earliest navigational instruments – the astrolabe, the cross-staff and the back-staff – to determine how far north or south they were from their point of departure. All instruments worked with the same principle: they measured the angle of the sun (or star) against the horizon.

As seafaring became increasingly important, sailors needed more precise methods to determine their position. They developed new instruments, such as the octant and sextant. These new instruments worked according to the same principle, but gave much more precise readings than their predecessors.

The bronze pocket sextant comes packed in a cloth pouch.

Be the first to review “Bronze Pocket Sextant” Cancel reply 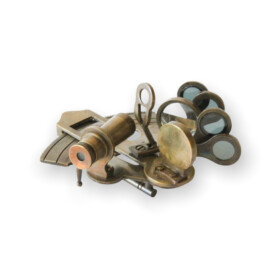