An original film can to preserve film… or other precious items such as cookies or jewelry! 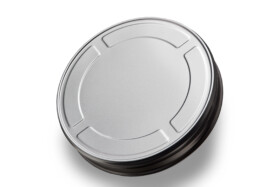